The Greatest Bank Robbery of All Time. Vicksburg, Mississippi 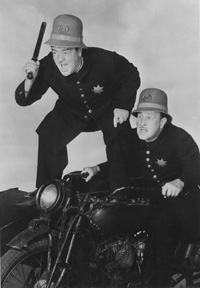 Okay so this isn’t really business related, but I LOVE the stories I hear on the road. At best, this is a good story to tell your clients about how backwards the south is. I can say that, I’m from Arkansas.

On my last trip to Mississippi, I heard about the most brilliant bank robbery of all time. The main branch of the local bank in Vicksburg was robbed. This is a small town and therefore a HUGE ordeal. Not that any bank robbery goes unnoticed, but we’re talking about a town where the big news article in the paper yesterday involved the increased use of debit cards versus cash. So the bank was robbed and the local police were tearing the city to shreds searching for the at-large bank robber.

At the same time, a man with a large duffel bag was filing a complaint about his neighbor’s annoying loud dog at the central police station a few short blocks away.

After filing the complaint, the man walked away from the police station. It wasn’t until much later, in reviewing the surveillance tapes, the police realized it was the same man. Okay, so it isn’t the stuff action movies are made of but you’ve got to admit it was pretty smart. By the way, they never found him.