44 FREE Things to Do in Washington, DC 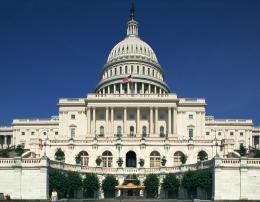 Destination DC just published a list of 44 Free Things to Do in Washington, DC in celebration of the coming inauguration. I think this is a great list for any traveler to our nation’s capitol, regardless of the reason. Without further ado, here is the list:

1. Stand on the steps of the Lincoln Memorial, where Martin Luther King, Jr. delivered his “I Have a Dream” speech and where Marian Anderson performed her historic 1939 Easter concert.
2. Catch a free concert featuring Aretha Franklin on January 19 at the Kennedy Center’s Millennium Stage.
3. Explore famous and infamous moments in history by following the “Civil War to Civil Rights” heritage trail through downtown DC.
4. Visit the newly remodeled National Museum of American History, where you can view a copy of the Gettysburg Address on loan from the White House. The theme of Obama’s inauguration, “A New Birth of Freedom,” is taken from the Gettysburg Address. Look for Obama’s name in the “American Presidents” exhibition.
5. See poignant images from the Civil Rights era on display in Road to Freedom, a special exhibition of more than 200 powerful photographs at the Smithsonian Institution’s Ripley Center, on display through March 9.
6. Make your way to Capitol Hill’s newest attraction, the state-of-the-art Capitol Visitor Center.
7. Live Martin Luther King, Jr.’s legacy by joining a volunteer program through Serve DC.
8. Check out the presidential portraits on display at the National Portrait Gallery.
9. Tour the magnificent Library of Congress and test out its new interactive exhibits, like the re-creation of Thomas Jefferson’s original library.
10. Only Bill Cosby and the Obama Family can eat for free at DC’s legendary Ben’s Chili Bowl — but visitors can soak in the local flavor and chow down on the cheap with their signature half-smokes — for just $5 or a chili dog for $3.60.
11. Cheer on the Inaugural Parade along Pennsylvania Avenue on January 20.
12. Watch a peaceful sunset at the Marine Corps Memorial (Iwo Jima Statue).
13. Read the headlines from newspapers from around the world outside the Newseum on Pennsylvania Avenue.
14. Learn what it was like to be a guest at a past presidential inauguration through The Honor of Your Company is Requested: President Lincoln’s Inaugural Ball, a special exhibition at the Smithsonian American Art Museum.
15. Admire great works at the National Gallery of Art.
16. Say “Inauguration” at The Phillips Collection admissions desk during the entire month of January and receive two-for-one admission. Take a picture of the Gandhi statue at the Indian Embassy, located just a few feet away.
17. Be a part of history on the National Mall and witness Obama’s swearing-in on January 20. The entire length of the Mall will be open to the public.
18. Watch the changing of the guards at Arlington National Cemetery.
19. Stop by the Lyndon B. Johnson Memorial Grove on the Potomac for some quiet reflection. 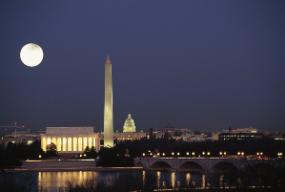 20. Follow the Greater U Street Heritage Trail and discover Duke Ellington’s home and other greats along what was once known as “Black Broadway.”
21. Walk the grounds of Howard University, one of the country’s historically black colleges, and duck into the Howard University Gallery of Art. Admission is free and it boasts one of the most comprehensive representations of black artists in existence.
22. Stroll the cobblestone streets of historic Georgetown, once the stomping grounds of JFK and Jackie Kennedy. Locate the booth at Billy Martin’s Tavern where he proposed to Jackie.
23. Stop for a photo opp in front of the White House, the new home for the new First Family.
24. Visit the Smithsonian’s Anacostia Museum that explores American history, society, and creative expression from an African-American perspective.
25. Take a stroll through grand Union Station. What was once the Presidential Suite, where presidents waited to board trains and greeted foreign dignitaries, is now B. Smith’s Restaurant.
26. See breathtaking photos and fascinating exhibitions at the National Geographic Museum.
27. Explore the diverse cultures of Africa at the Smithsonian’s National Museum of African Art.
28. Pay respect to those who served at home and abroad at the Vietnam Veterans Memorial, Korean War Memorial and National World War II Memorial.
29. Listen in on native folktales or catch a cultural performance at the National Museum of the American Indian.
30. Visit DC’s newest memorials, the Pentagon Memorial and the U.S. Air Force Memorial.
31. Get to know a Lincoln contemporary, Frederick Douglass, by touring his home, Cedar Hill (advance reservations: $1.50). While there, you’ll enjoy one of the best views of the DC cityscape.
32. Take a hike on Theodore Roosevelt Memorial Island and find inspiration in the quotes from the environmentalist president, engraved on the memorial plaza.
33. Browse local art and sample fresh fare at Capitol Hill’s Eastern Market (Sat. & Sun.)
34. See a public mural featuring Barack Obama outside neighborhood hotspot Marvin (at 14th & U), named for DC’s own Marvin Gaye.
35. All those visitors coming in for inauguration? You can watch their many, many airplanes take off and land at Reagan National Airport from popular park Gravelly Point, located on the Potomac River.
36. Watch skaters glide on the ice (or join in the fun — adults $7/ 2 hours) as you take in the outdoor art at the National Gallery of Art’s sculpture garden and ice skating rink.
37. See the original Declaration of Independence, U.S. Constitution and Bill of Rights at the National Archives, then stick around to research your own family’s immigration records. 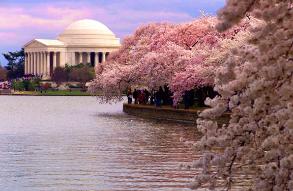 38. Brush elbows with a genius with a visit to the Einstein Memorial.
39. Walk east of the Capitol to Lincoln Park to see the Emancipation Statue, the city’s first memorial to Honest Abe, along with a statue honoring African-American education pioneer Mary McLeod Bethune.
40. Stop by the African-American Civil War Memorial on U Street.
41. Experience one of the world’s most moving museums, the U.S. Holocaust Memorial Museum.
42. Build your horticultural IQ inside the U.S. Botanic Gardens.
43. Find literary inspiration for your own presidential address at the Folger Shakespeare Library.
44. Climb inside a cockpit and touch a moon rock at the National Air & Space Museum.