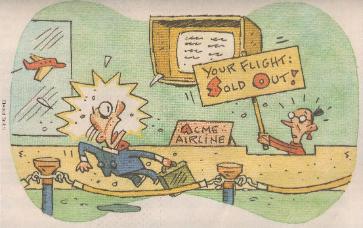 There are two kinds of people in this world. People who love to be bumped off a flight and people who loathe it. As many times as I’ve seen lucky passengers win the $400 to take the next flight, I’ve never personally had the opportunity. The one time I could have, and should have in retrospect, taking the bumped flight earnings would have meant missing my 10 year high school reunion. Oh, to have that $400 in my pocket and those 6 hours back….

Those of you who are happy to wait three hours on that next flight to score some perks are in luck. New government regulations are requiring airlines to DOUBLE the current bumped flight compensation for passengers on oversold flights to as much as $800, beginning in May 2008. With flights selling out worse than M.C. Hammer, something had to be done. Of-course certain conditions do apply. In addition, the new rule applies to planes with 30 or more seats, where the current rule only covers planes with more than 60 seats.

According to the new rules, passengers who are involuntarily bumped from a flight will now receive $400 if they are rescheduled to:

If the delay is longer, the passenger will now be entitled to a whopping $800. You can get a lot of places with an $800 airline voucher.

How do the airlines determine how much you’ll be compensated? The dollar amount depends on two things:

The amount is in addition to the value of the passenger’s ticket, which can be used for alternate transportation or can be refunded.

They’re up to more than just adding value to your missed flights. Many people don’t seem to realize there are highway lanes in the sky, just like on the ground. These specific routes are responsible for a majority of the “air traffic control” delays passengers deal with on a frequent basis. Jets can only fly in a specific area and have to fly a certain distance from one and other, and when that area gets congested people get delayed.

With the new rules going in to effect, aircraft will now be able to fly alternate routes to avoid severe weather, including crossing in to Canadian airspace from the New York metropolitan area. The NYC airports are the busiest, most delayed in the world because there are so many flights arriving and departing in such a small area. Hopefully this will decrease weather delays, as it gives air traffic controllers more room to work with. In addition, the FAA will open a second westbound route for aircraft, in effect adding another highway lane in the sky. The new route is aimed at reducing westbound delays from the New York area, which are all too frequent.

These are the new ideas being cranked out to reduce airport traffic in New York, as promised by President Bush some months ago.