Although it closes at 5:00 p.m., Graceland is still right there in the middle of Memphis, Tennessee in all its jungle room glory.

If you’re in Memphis on business, this may be a hard tour to pull off. The last tour starts at 4:30, so you’ll have to play hooky for a half day to get it done.

When I was in Spain, no one had any idea where the entire state of Arkansas was located. When I said it was two hours from Graceland, they got excited. I made that trip when I was 24. Believe it or not, I had never been to the home of The King. So I made the trip. 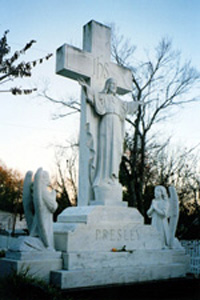 All 14 acres of Graceland sits on Elvis Prestley Boulevard (big surprise there) off of I-55 in Memphis. Don’t forget your AAA card at the office; you do get a 10% discount off the regular $22.00 ticket price.

Once you’re inside…I’ll let you decide for yourself. I will tell you that it’s a lot smaller than you would imagine. It’s the size of a regular golf-community home, hardly worthy of being called a mansion.