Aircraft Air Contamination. Way Scarier Than Snakes on a Plane 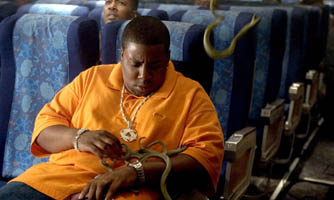 Chemical agents could be released on an airplane. Okay, we’ve all heard that by now. It’s the whole reason behind the TSA liquid hysteria for the last few months. But the Wildcats (that’s Kansas State University, if you’re not a basketball fan) have made it their business to find out how much damage could really be done.

What is the canary in the coal mine for this little experiment? 80 mannequins. The KSU staff has been doing similar research for years; however, in the past the focus has been on accidental contamination. Now with the very real threat of an intentional contamination, they’ve shifted their focus.

Researchers at K-State are under contract with the Federal Aviation Administration to study how to detect, contain and remove contaminants on planes. KSU long has been a center for study of air quality and adapting to adverse conditions, such as how soldiers can cope with heat in Iraq by wearing cold-water vests.

It’s hard to even think about without getting the willies.