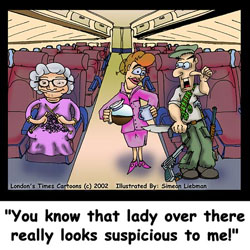 Joke of the Week: The flight attendant announced upon arrival, “Thank you for flying Delta Business Express. We hope you enjoyed giving us the business as much as we enjoyed taking you for a ride.” Hehe.

Air Jamaica will begin new daily non-stop service between New York and Barbados. I guess they got their plane out of hock.

AirTran upped its offer from $290 million to $345 million for all of Midwest Air Group’s outstanding shares. But Midwest management maintains they will continue to be a stand-alone carrier.

Alaska Airlines is expanding with new daily nonstop service beginning September 9, 2007 between Portland International Airport and Boston and Orlando. Maybe the BootsnAll boys will finally get a tan :).

American Airlines has kicked Expedia to the curb as far as first class, business class and international ticket sales go. Expedia Corporate Travel may be exempt from the break up. You can still get domestic coach. AAdvantage members earn up to 500 miles for each eligible First or Business class ticket purchased at AA.com or 250 bonus miles for coach class tickets. Between now and January 15 (act fast), you can earn 1,000 bonus miles for checking in online. AA has announced they have applied to the US Department of Transportation (DOT) for authorization to begin codeshare flights with Malev Hungarian Airlines beginning March 25, 2007. An agreement has been reached with AeroSvit, allowing new routes between the US and the Ukraine. This agreement will allow AeroSvit and American Airlines to transport passengers between the two countries using American Airlines domestic routes and AeroSvit’s transatlantic routes with connecting flights in New York.

British Airways is offering huge savings on flights between New York and London between now and February 4, 2007. Check the ad on the homepage. Beginning yesterday, BA will reduce fuel surcharges from £35 to £30 on long-haul flights per-way of fewer than nine hours. That change will encompass many cities in the eastern US.

Caribbean Sun Airlines is closing down shop. San Juan-Santo Domingo service will end on January 16, 2007 and all remaining flights will end January 31, 2007.

Continental Airlines is making the sky a friendlier place with the installation of their new Audio/Video on Demand (AVOD) in the BusinessFirst cabins of its Boeing 757 aircraft, which are used primarily on transatlantic flights to/from its New York hub at Newark Liberty International Airport. The systems, which allow customers to watch any of 25 movies, 25 short programs, 50 CDs, play over 20 video games (Please, Please, Please let Bejewled be on the list!) or learn a foreign language, will be installed in the economy cabins of these aircraft beginning summer 2007.

KLM Airlines has paired with Amsterdam’s Schiphol Airport to introducing Self-Service Transfer Kiosks to help travelers rebook flights and print boarding passes on their own instead of having to wait in line to speak to airline representatives in person. The kiosks are aimed at travelers who miss connecting flights out of Schiphol and need to make alternative travel arrangements. That’s probably because of all the people flying in on Northwest who are consistently late.

Mesa Air Group will begin new 6 day a week service on February 1 between Farmington and Las Vegas operating as US Airways Express.

Midwest Airlines is allowing frequent flyers to redeem miles for pet travel. You can keep Fido in the cabin for 20,000 miles or carry him in the cargo hold for 15,000 miles. Great way to make travelers cough up the miles for no real value. They have also announced new nonstop service between Duluth/Superior and Milwaukee beginning March 4, 2007 as well as “enhanced” service (bigger plane) between Milwaukee and St. Louis.

Myrtle Beach Direct Air & Tours, a new air service based in Myrtle Beach, will begin non-stop service between Myrtle Beach and Newark on March 7, 2007 operating on Sunday, Monday, Wednesday, Thursday, Friday. Here’s one hell of a deal: To kick off the flights, Myrtle Beach Direct will offer March Myrtle Madness specials with one-way air fares starting at $99 and golf packages at $399 per person. The four-day package includes round-trip air fare, three night’s accommodations, two rounds of golf and a rental car. March Myrtle Madness must be booked by January 31st with travel completed by March 31st, 2007. Via PRNewswire.

Northwest Airlines has announced an exclusive partnership with WhiteTie, an international-luxury concierge service, providing the carrier’s WorldPerks members the rare opportunity to purchase annual WhiteTie memberships at a special discounted rate. That actually means nothing to me. I hope you get something out of it.

SkyValue will continue offering non-stop service from Gary Chicago International airport to Mesa/Phoenix, Las Vegas, St. Petersburg/Tampa Bay and Orlando. Previously seasonal winter flights, the above will be extended to a yearly service.

TAM Airlines will increase service from 14 to 17 weekly flights between Rio and France as of January 12.

United Airlines has got the green light to begin the DC to Beijing flight. They beat out American, Continental and Northwest for the one new awarded route to China. United Airlines has partnered with Chef Charlie Trotter to create cuisine for first and business class customers on eastbound trips to Europe and some cross country flights.

US Airways hasn’t given up on plans to takeover Delta Air Lines. They have now increased their bid to take over Delta by about $2 billion, based on current US Airways share prices. Myrtle Beach is a busy place this week. US Airways will begin new daily service between LaGuardia and Myrtle Beach on March 4, 2007. From Philadelphia, US Airways will expand European service with new flights to Athens, Greece; Brussels, Belgium, and Zurich,
Switzerland starting this summer.

US Helicopter Corporation has reached an agreement with the TSA and McNeil Security Inc. to begin service from the East 34th Street Heliport in New York City. The goal is the 8 minute shuttle to Newark Liberty International from midtown Manhattan.