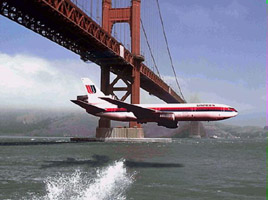 Air China and Shanghai Airlines will join the Star Alliance in 2007.

Air Jamaica had a plane seized. For real.

Emirates is planning on opening flights up to cell phone talk next year, along with Qantas.

Smintair, the new smoker’s airline, is looking to take off in October 2007. Weird.

United Airlines has a GREAT promotion right now. Purchase and fly 3 qualifying round trip flights on United, United Express® or TedSM between November 10, 2006 and January 31, 2007 and you can earn 25,000 bonus miles. That’s enough for an awards flight.

US Airways is offering $1 gift cards for Cold Stone Creamery on selected flights from November 13 to November 21. Ice cream, just what you want in this cold weather.

WestJet will begin offering weekly service from Halifax to Tampa in March 2007.