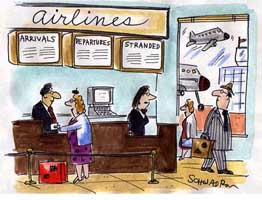 Joke of the Week: On a Continental Flight with a very “senior” flight attendant crew, the pilot said, “Ladies and gentlemen, we’ve reached cruising altitude and will be turning down the cabin lights. This is for your comfort and to enhance the appearance of your flight attendants.”

American Airlines has amended its bid for DFW/Beijing service to include a stop in Chicago on outbound flights. The change is to satisfy pilots objection to the lengthy flight. The airline said Friday it has asked to amend its plan now pending before the Department of Transportation. According to the airline, return flights would fly direct because tail winds reduce their time. Basically, this tells me American will lose the battle. The other carriers are offering direct flights. A flight with a layover won’t be able to compete. It’s a shame, I thought a Dallas/China direct flight would do a lot for parts of the country that haven’t had the luxury of decent routes to Asia in the past. American has partnered with Gulf Air to offer reciprocal mileage opportunities for AAdvantage and Gulf Air members. Gulf Air serves 50 destinations in 30 countries throughout the middle east.

British Airways is is beginning a £100 million overhaul of its Club World seats. Flyers will enjoy new lie-flat sleeper seats and an upgraded on-demand television system. The airline is taking inventory out of economy to accommodate more premium business

Northwest Airlines is offering 600 Bonus Miles every time members spend $200 in the WorldPerks Mall through December 31, 2006. Register here.
They also reiterated to me that they are the absolute worst airline in the United States with several delays and horrid service in Memphis.

US Airways announced they will give up their proposed takeover of Delta Airlines if Delta management disagrees with the takeover. US Airways CEO Doug Parker said he won’t fight Delta’s management in bankruptcy court by submitting a merger plan to the Court without the support of Delta officials. They also announced an expansion of their partnership with Vegas.com. US Airways will be installing VEGAS.com’s Cyllenius Concierge Systems in US Airways Clubs, allowing customers to purchase show tickets, restaurant reservations, golf tee times, front-of-line nightclub passes and more before they board their plane to Las Vegas. The new installations will begin with Sky Harbor International Airport in Phoenix and expanding throughout clubs worldwide.

Virgin Atlantic Airways is bringing back daily service between O’Hare and Heathrow. They plan on reducing fuel consumption by towing them to and from runways. Pretty crafty.