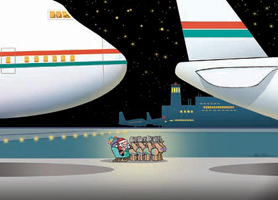 Joke of the Week: On landing, the flight attendant said, “Please be sure to take all of your belongings. If you’re going to leave anything, please make sure it’s something we’d like to have.”

AirTran Holdings Inc. made a $290 million stock and cash bid for Midwest Air Group Inc. on Wednesday. No word yet on the outcome.

American Airlines will be upgrading its domestic first class cabins with upgraded, motorized seats as well as new upholstery and a brighter cabin. Personal entertainment systems will allow travelers to browse recent newspapers and watch recorded television programs and first-run movies. Partnered with Marriott Vacation Club, American Airlines is offering travelers the prize of a lifetime. From now until Jan. 31, 2007, travelers can enter the AA.com Travel for Life Sweepstakes for the opportunity to win one grand prize of 1.5 million American Airlines AAdvantage(R) bonus miles, Marriott gift cards valued at $30,000, and a $30,000 MasterCard(R) gift card. Ten first prizewinners will receive a $500 MasterCard gift card. Enter at https://www.aa.com/promo.

Continental Airlines is in discussion with UAL’s United Airlines regarding a possible merger. The rumor mill is flying and everyone has an opinion, as they do with any potential large airline merger. To my knowledge, the talks are still very preliminary. The Business Travel Coalition, which represents travel managers of large corporations, asked the Transportation Secretary to re-evaluate the coming China flight proposals. A BTC spokesman said a combined United and Continental would dominate new and existing China service to and from the United States. Continental begins new nonstop Saturday service today from its Newark to Roatan, Honduras, and to Bonaire, Netherlands Antilles.

Delta Air Lines has unveiled new online amenities for speakers of French, German, Italian and Portuguese, in addition to the Spanish capabilities rolled out earlier this month. With good reason as they became this week the first and only major airline network to serve 300 destinations with the inauguration of nonstop service between Los Angeles International Airport and La Paz, Mexico. New trips to Costa Rica, Guatemala, Nicaragua, Mexico, Dominican Republic and Martinique.

JetBlue is removing one row from each of its Airbus A320 aircraft. Why? To save money on fuel costs and flight attendant salaries. Probably everyone is happy about this but the flight attendants. The removal will give passengers in rows 1 through 9 an additional 4″ of legroom. The emergency rows and back two-thirds of the cabin will remain unchanged.

Qantas Airways this week accepted a $8.6 billion offer from a group consisting of Macquarie Bank, Allco Equity Partners and Texas Pacific Group of Fort Worth, Texas. This deal is subject to approval by Qantas shareholders and the Australian government. Upon approval, the publicly-traded airline would be removed from the stock market, and the current management team will continue to operate the business.

Southwest Airlines has a fun new advertising contest going on. The challenge is to submit 20 seconds of an awkward or humiliating moment on YouTube. The winning entry will be used in the airline’s “Wanna Get Away” campaign which shows people in embarrassing situations that made them want to “get away.” Entrants must be registered with YouTube and join the Southwest “Wanna Get Away” group.

United Airlines is unveiling their new first class seat for international flights, the First Suite, scheduled to be in use by the end of 2007. It will be 3″ wider than previous seats; recline to a flat 6′ 6″ bed; 15.4″ widescreen flat panel monitor with an on-demand digital video and music system with multiple selections of movies, TV programs and video games; 50 channels of XM-branded audio content containing more than 3,000 songs and a jukebox to create customized play lists; a 110-volt universal plug for laptop power, compatible with power outlets for 145 countries; a Universal Serial Bus (USB) port to charge personal electronic devices, such as personal digital assistants, cell phones and digital cameras; multiple storage compartments to accommodate a laptop bag and other personal items; noise-canceling headphones; an Apple iPod connector that enables customers to play their own music and video on the suite’s entertainment unit as well as recharging the iPod unit.

US Airways‘ CEO, had the following to say about the proposed merger with Delta: “We at US Airways are fully committed to our proposal to merge with Delta. We are pleased to have had the opportunity to meet with Delta’s management and the Official Unsecured Creditors’ Committee over the past week. We believe that our discussions have shown that our proposed merger of US Airways and Delta can be achieved, and that if achieved will create a strong, healthy airline, able to compete long into the future in any industry scenario, benefiting our employees, customers, and the communities we serve, as well as providing Delta’s creditors with the opportunity to receive far greater recoveries than what they will receive under any Delta stand-alone plan.”