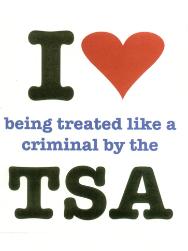 After a recent experiment, in which federal investigators successfully smuggled bomb components in to 19 U.S. airports, the investigators are recommending increased airport security. As a frequent flyer, this information scares the crap out of me.

What’s even scarier is that air safety officials disagree with increased security because “American passengers dislike intrusive pat-downs.” Who cares what passengers like if the safety of everyone on board is at risk? I like a pat down much more than I like the possibility of there being a bomb on board my next flight.

The components that were in question were those that can be used to create a liquid bomb.

Limiting the size of carry on luggage and increased physical searches were the two options suggested to curb the bomb-smuggling ability of passengers. Utilizing better technology was the other suggestion and the only one the TSA agreed with.

Kip Hawley, head of the Transportation Security Administration, said that Americans do not like aggressive physical searches and indicated that his agency would pursue technological solutions. He added that the TSA was constantly working on security measures and that Americans could fly with confidence as the busiest travel season of the year approached.

Mr. Hawley was argumentative during the hearing, maintaining that although the the bomb components did make it through security, they did not make it on the plane. Further, the bombs showed detonating in a car in a demonstration video used by the GAO during the hearing were not constructed of the same materials as those smuggled through security. Gregory Kutz of the GAO counted claims.

Hawley pointed out that a completed bomb was not taken through security, but any idiot could tell you the terrorists would have ample opportunity to put the bomb together after the screening in the airport or lavatory.

He said greater restrictions “puts more pressure on checked baggage.” I know, NO ONE wants to check their bags (I don’t either) but it’s a minor inconvenence when you consider the alternative.

This test showed no improvement from a similar test in 2006, in which investigators were able to smuggle the bomb components in to 21 airports across the country.

Via The LA Times.