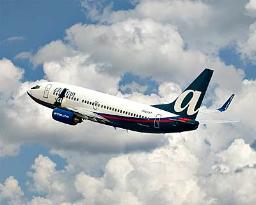 AirTran Airways is putting tickets on sale for every destination served by the budget carrier, with prices starting as low as $59 one way. These prices are good for tickets purchased between now and July 29, 2008, so if you want in on the action you’d better act fast. Fare rates are good for travel through November 12, 2008. All sale fares are one way and do require a 14 day advance purchase. If you can travel on Tuesdays or Wednesdays, you’ll get the best deals.

Here are some sample fares for travel on Tuesday or Wednesday:

As always, here’s the fine print: All fares are one way and non-refundable. A $75 fee per person applies to any change made after purchase, in addition to applicable increases in airfare. One bag per person may be checked free of charge, and a 2nd bag may be checked for $20 per person. Additional sale fares are valid for travel on the other 5 days of the week. Seats are limited, subject to availability, and may not be available on all flights. Blackout dates are as follows: September 1, 2008. Fares do not include the per-segment tax of $3.50, the September 11th security fee of up to $10 or the Airport Passenger Facility Charges of up to $18. Fares to/from Puerto Rico do not include the additional government taxes of up to $30.80.

You can purchase your ticket for free at airtran.com or for a small fee through (800) AIR-TRAN.