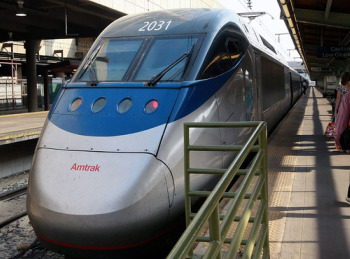 Since it’s becoming more and more impossible for business travelers to ever be disconnected, this is very good news – Amtrak has finally made WiFi available on all Acela Express trains connecting cities in the busy Northeast of the US. In addition to having WiFi on the trains themselves, stations in six major cities will also have WiFi so you can surf while you wait for your train.

The six Amtrak stations with WiFi in the gate areas are: Washington Union Station, Baltimore Penn Station, Philadelphia 30th Street Station, New York Penn Station, Providence Station, and Route 128 Station in Boston. Wilmington Station will eventually be added to that list (although not until next year after some construction work currently underway is finished).

Amtrak says the service is free for now, but don’t rely on that freebie for long – they’re going to “review the policy” in the not-too-distant future to see whether they should be charging for it or leave it free for some or all passengers. While I think we’d all love to believe free WiFi would remain free once it’s introduced, we’re all growing so accustomed to airlines charging for every little thing that if Amtrak changed its policy and started charging for it it wouldn’t be at all surprising.

So if you’re a WiFi junkie, soak up the free signal while you can.