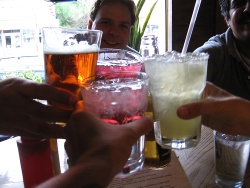 Amtrak is offering a promotion that I can get behind – free booze on certain routes in November and January. Unfortunately, I won’t be able to get this deal taking the train in to the city. It is only available on GrandLuxe trips on the California Zephyr between Chicago and San Francisco, the Southwest Chief between Chicago and Los Angeles, or the Silver Meteor between D.C. and Miami or Orlando.

These trips are “separate, special cars that attach to regular trains and operate primarily as sleeper cars. The idea is to revive some of the old-style luxury of train travel from days gone by. Tickets for these trips start at about $789, and include dinner and other drinks too.” Maybe if I win the lottery.