Back From Nicaragua, Part II 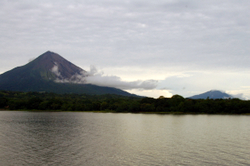 7:00 am the following morning we met Nine for the climb. He was actually a terrible guide, I wouldn’t recommend him at all. He told us little about the indigenous plants and animals and nothing about the geology or makeup of the island. We did learn, however, how to drop an f bomb in several Latin American countries. He rambled on the entire trip about random things that had nothing to do with the volcano or the island. It was really annoying. Several times, he went ahead with the other two members of our group, leaving us to fend for ourselves. Fend for ourselves as in decide which path to take when the trail split. I really didn’t know if I would make it to the top. And I walk 3 to 4 miles about 5 times a week, so I’m not too out of shape. Seriously, it kicked my a$#. But the view from the top was worth all the work. Sadly, after the climb we had to change clothes and make our way back to the mainland.

From the mainland, we headed directly to San Juan del Sur, with a plan on turtle watching and surfing. We arrived at our hotel and were advised to go immediately to the Hotel Oro if we wanted to do the turtle nesting tour that night. After signing up for the tour, we had a little time to kill and were introduced to the El Macua, the new national drink of Nicaragua, by some other travelers we met up with. Really tasty rum drink with fruity stuff. Mmmm.

The Turtle Tour was phenomenal. Truly a once in a lifetime experience. Hotel Oro has a professional guide, who is responsible enough to avoid flashlights and disturbing the turtles during nesting. If you do any research in to turtle nesting, you can find out the problems people can cause by these tours. Other guides did not follow the same guidelines. So, we took the trip down bumpy dirt roads to get to the nesting ground, fording several rivers along the way. It was POURING rain and lighting occasionally while we were on the beach and my friend Sammi will forever be known as Michael Jackson for wearing all white…outside in a rainstorm. Every time the lightning flashed, you could see hundreds of the Olive Ridley turtles. Apparently, we picked a great night to be there. You couldn’t stand in one place for more than a few minutes without a turtle practically walking in to you. Also, with every wave the beach would sparkle with the phosphorous plankton coming ashore. It was amazing. 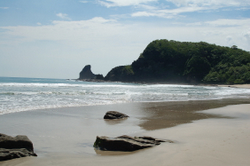 I will always remember roosters as being the sound of Nicaragua. The morning after our volcano climb and turtle watching, we again woke to the sound of a rooster crowing. Today was the day to lay on the beach and relax. I gave up the surfing idea…pretty much immediately. The beaches were beautiful and very relaxing. I’m still amazed to visit the Central American beaches and not see another person for the entire stretch of land. Very relaxing. We got back to San Juan del Sur, got some more Macuas with dinner and got our taxi back to Managua. The LP guide says a taxi should be about $40, but plan on $75.

So that was it. My “relaxing” mini-vacation for this month. Last night I slept for over 12 hours and now I’m preparing for my next business trip. My bruises are healing nicely, most of the dirt has come out from under my fingernails, my tan looks great and I’m ready to get back to work.