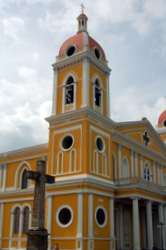 Like I mentioned before, business travelers need time to recuperate from all of the stress of frequent travel. If you stay at home, you’ll surely be sucked in to some project you’ve been putting off or lay in a vegetative state on the couch. So I really suggest a trip away for fun, as often as possible. And with all of those frequent flyer miles and hotel points, the opportunities are endless.

Last month, I made my way to Tulum, Mexico to lay on the beach and drink Modelo for days. It was a beautiful trip and it breaks my heart that the tiny town was all but destroyed by the hurricane last week. A friend and I were planning a trip to Belize (Cayo and Caulker) but had to redirect at the last minute due to Dean’s fury. That’s why we ended up in Nicaragua, and I’m SO glad we went. 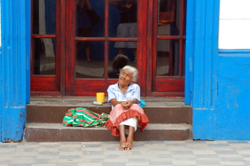 We arrived in Managua pretty late. If you haven’t already heard all of the stories, that is one sketchy city. So we immediately made our way to the bus stop and hopped on the first outbound to Granada. Buses to Granada do run pretty late (we were there somewhere between 8:30 and 9:00) so don’t let you cab driver tell you there are no more buses and take you to “his friend’s” hotel to spend the night and catch the bus in the morning.

When we reached Granada, it was time for the nightly blackout. Nicaragua really is experiencing an energy crisis and the cities and towns have blackout periods each night. I guess it’s not safe to walk around Granada during the blackout so we went to bed. The hostel, Hostel Oasis, didn’t have the best vibe. It wasn’t necessarily bad, but you didn’t meet other travelers in the way you do at every other hostel in the planet. I’m glad we only spent one night there. Granada, for all of its history, isn’t the most happening scene. We spent the morning snapping pictures of the historic buildings and soon tired of the whole thing. Other travelers we met along the way had the same impression. So we began our LONG journey to the island of Omotepe in the middle of Lago de Nicaragua. This trip involved a chicken bus to Rivas, a collectivo to San Jorge and then a boat to the island. It took several hours, but was worth every second.

Omotepe is now one of my favorite places on the planet. We arrived in the small town and dashed to the nearest restaurant for lunch. It happened to be a tiny place on the main road with outdoor seating. I got the small fish and it was huge. The plan was to climb the easier of the two volcanoes on the island, but we only had a day so we couldn’t make the 5 hour round trip to that side of the island AND make the 8 hour climb. That could only mean one thing – we were going to have to climb Concepcion. The very difficult, active volcano nearby. The guide said the climb was a piece of cake. But then our LP guide warned us that it was not, in fact, an easy climb and that the local perception of “easy” is a bit off. We decided to give it a go anyway and had plans to meet our guide bright and early the next morning. So we spent our evening hanging out with the locals, including our new friend El Borracho and Dave the musician from L.A., drinking Tona, Nicaraguan beer. It was a BLAST!