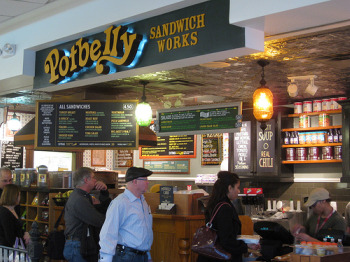 Every business traveler who watched “Up in the Air” could probably totally relate to many parts of the film – but one that I thought was particularly amusing was when the two road warriors exchanged travel preferences (in the form of their collections of reward and membership cards). They talked about which rental car companies they liked best, which hotel chains had the best perks, etc. But one thing they didn’t mention was which they thought were the best airports.

An article from Food & Wine magazine’s website lists the best places to eat and drink in 20 different airports around the country, with 1-3 spots mentioned per airport. It’s a handy guide that not only tells you what each restaurant features on its menu but also where in the airport it is so you can find it easily. And since it was published by a food magazine you can rest assured they were judging these places primarily (if not exclusively) on the actual food.

Most of the places listed in the article aren’t ideal for a quick grab-and-eat on the run, but if you’ve got a bit of time to kill on your layover they’re definitely worth keeping in mind. And since they’re in airports, many of these places are accustomed to wrapping to-go orders – which means you’ll be the person making all your seat-mates jealous when you unwrap that lovely-smelling lunch and they’re stuck nibbling on peanuts.

The other article, from Conde Nast Traveler and published on msnbc.com, is a rundown of the best airport lounges in the U.S. And while many infrequent travelers don’t have regular access to lounges like this, they are well-utilized by business travelers who are loyal to one airline or alliance.

The article isn’t exactly great reading (and it’s a little tough to navigate), but it is a quick review of airport lounges for American Airlines, Continental, Delta, and United in Atlanta, Chicago, and Los Angeles – so you’ll get an idea of what to expect from similar lounges in the country’s busiest airports. American’s Admirals Club ranked highest overall, and United came in with the lowest overall score.

What airports do you think have the best airport lounges? And in which airports have you had the best meals?