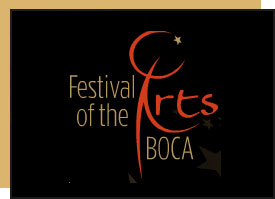 Boca Raton is gearing up for the second annual Festival of the Arts Boca (FAB) to take place from February 29 to March 16, 2008. FAB, I even love the name! According to the press release, “The 2008 Festival of the Arts BOCA is ambitious and undoubtedly will be well received by international music and literary enthusiasts.” Hmmm. Sounds like as good reason to schedule a trip to the area as any. I’m a girl who likes a festival. What can you expect from FAB?

FAB is a seventeen day festival held at the Count de Hoernle Amphitheater in fabulous Boca Raton. FAB will feature “only the top names in classical, opera, jazz and Latin music, while literary discussions and readings will showcase some of the world’s most recognized and award winning authors.” Sounds fancy.