Bothered about doing business in Germany?

Clinching a business deal can be nerve-wracking at the best of times – but when doing so in a foreign country it can seem like an unnecessary nightmare. That’s because every country has its own unique methods of conducting business. In addition, you’ve to negotiate the transport system, hope you’ve been booked into a decent hotel, and can actually converse with people.

So before you start hyperventilating, we’ve jotted down a few helpful pointers for doing business in Germany: 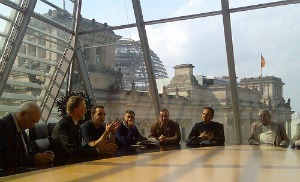 Meetings can be formal and to the point initially. In fact, unlike in France, don’t expect a lot of small talk at all. You’ll also find your German colleague values truth over diplomacy, which can seem abrupt and almost rude at first but it’s more straight-forward, efficient and in the long run you’ll really come to appreciate it.

Germans make a big distinction between work and family life and rarely shall the twain meet. You should feel very honoured to be invited home for dinner with a German colleague’s family.

Don’t be surprised to find fewer women in senior management positions in Germany than in other European countries. The situation is changing but perhaps not as quickly in other places you’re used to.

German business talk tends to be very structured and often meetings are accompanied by an agenda received several days in advance. This is for the purpose of clarity and speed and actually makes a lot of sense but it’s the kind of thing Germany gets its ‘efficiency’ reputation from. Business decisions can often take time too while senior management inspect every detail (never expect an impulsive business decision in Germany).

Punctuality is important when doing business in Germany. It is customary to arrive ten minutes prior to a meeting as being late is regarded as rude as well as unprofessional. As a result of this and their hard-working industrial nature, you will rarely find a German businessman or woman having to work overtime or come in to office especially early in the morning.

When doing business in Germany you’ll want a hotel where you can have facilities such as wi-fi, a scanner, fax machine etc at your fingertips. Hotels such as the Holiday Inn can provide these as well as a formal conference room (konferenzräume) in Frankfurt if conducting business out-of-hours or, for confidentially purposes, outside the office. They’ll also have parking provision for lease cars and tend to be cited near the city centre or near good public transport options. 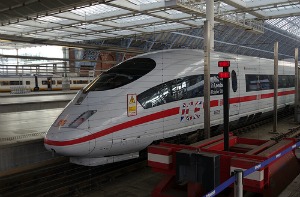 Germany’s national train service – Deutsche Bahn AG – is high-speed, super-efficient and links to every major city in the country. Travelling at 190 mph it can also be costly but it’s an impressive service.

Driving between cities is also easy thanks to the Autobahn where there is NO speed limit (which can be rather nerve-wracking at first). Rental cars are simple to find and in abundance.

Internal flights will also take you to every city in Germany and most within the space of an hour. Many airports such as Munich, Berlin, Kohn and Hamburg offer major international flights. Frankfurt is Europe’s second largest airport in terms of passenger volume.

In Germany all nouns have capital letters which may seem strange at first but you soon get used to it. In terms of pronunciation the letters ‘ch’ are said with the tongue behind the teeth.

Germans can come across as blunt and even rude. But 99 per cent of the time it’s not intentional. Particularly in business, German’s appreciate clarity and economy. As such they will drop any unnecessary words such as ‘maybe’ or ‘sort of’ – the type of words other European countries and Americans might consider conversational.

Germans, even at leisure, are a nation of great ‘truth tellers’ which, in turn, means diplomacy isn’t a strong point. But at least you’ll know exactly where you stand!

So there you have it. Some help in negotiating your way while working in Germany. Now go clinch that deal!