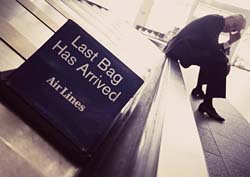 A Seattle based law firm, Hagens Berman Sobol Shapiro, has filed a class action lawsuit against British Air alleging the airline was acting recklessly when they lost more than one million passenger bags over the last year. This class action seeks to represent American international British Air travelers who had luggage lost or damaged or delayed between September 5, 2005 and September 5, 2007. And the airlines are surprised that no one ever wants to check their bags. The lawsuit maintains British Air should reimburse the affected passengers for the actual losses incurred. And they should. Why should the airline be able to damage or lose an unreasonable quantity of goods without having to pay for it?

HBSS is expanding the original Complaint, which was filed on September 5, 2007, to include 10 additional named plaintiffs. The Amended Complaint alleges more instances of the airline’s record for delayed, damaged and permanently lost luggage with new Discovery statements and documents provided by the airline acknowledging the baggage problems. The lawsuit, which was filed in the Federal Court in Seattle, claims the airline loses 23 out of 1,000 passenger bags carried. That gives them a record of about 60% more bags lost than the industry average. As bad as people talk about U.S. based airlines, that statistic makes British Air twice as bad as the very worst U.S. carrier.

According to the Complaint, the airline failed to notify passengers of the known baggage handling problems, even after an April 2007 report indicated the airline’s baggage handling system was overloaded by nearly 25 percent. By March of 2007, the Complaint stated the airline’s backlog of mishandled bags reached 20,000 in number. The Amended Complaint determined British Air employees claim the backlog was actually closer to 40,000 bags at that time.

“Since the complaint was filed in September, we have been inundated with calls and e-mails from passengers who experienced horrific treatment by British Air, in the way the airline dealt with baggage, and how they dealt with passengers searching for luggage,” said Steve Berman, managing partner of the firm.

The class action is intended to recover actual losses incurred by travelers whose luggage was lost, delayed or damaged. The attorneys claim the Montreal Convention waives the $1,500 loss limit when the carrier is reckless and has knowledge that damage will probably result to travelers. That being said, the Amended Complaint alleges the airline is liable under the Montreal Convention, which dictates how airlines handle passenger baggage. One hundred and twenty five countries are members of the Montreal Convention, including the United States. The Convention also provides the rules by which airlines can be held legally and financially liable for damages sustained in cases of destruction, damage to, or temporary or complete loss of checked baggage.