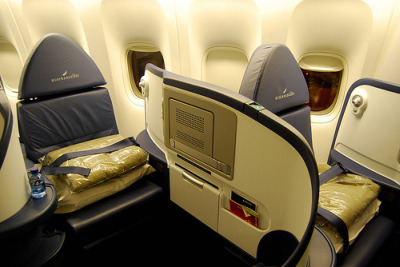 Although you can usually expect to pay more for Business Class airfare than you would for a ticket in Economy Class, that doesn’t mean you have to pay full price for either ticket. Just as there are several tricks to make sure you’re getting a better deal on any regular airline ticket you buy, there are also ways to find cheap Business Class airfare, too. And in fact, if you play your cards right, you may end up getting a better deal on your Business Class ticket than some of the less-savvy folks back in coach.

By far the most straight-forward way to get Business Class airfare without paying full price – and in some cases without paying anything more than the taxes on that ticket – is to cash in frequent flyer miles. People who travel frequently, either for business or not, have the ability to rack up these miles quickly just because they fly often – but there are other ways to earn airline miles so that you don’t have to fly cross-country a hundred times before you get a reward.

In addition to earning points by flying, two other easy ways to earn points are with hotel rewards programs and mileage credit cards – but each frequent flyer program has other ways for you to earn miles that have little or nothing to do with traveling. For instance, some will give you miles for signing up for Netflix, ordering USA Today, or getting a quote through LendingTree.

Along with how you can earn miles, you need to also look at how quickly you can redeem them – so be sure to read through an airline’s frequent flyer program rules before you sign up. Just know that paying attention to where you spend money and what you spend it on can have you earning enough miles for Business Class airfare in no time.

Many frequent travelers swear by the free Business Class upgrade, which they’ve mastered the art of getting more often than not. The bottom line is that it never hurts to ask – and be extra-nice to the people working at the gate if you want a chance. But if you’re only traveling at peak times you can count on being turned down – those who are successful with this are people who are traveling in the off-season, at less busy times of day, and especially not around major holidays. Obviously they can’t upgrade you if there aren’t any vacant seats in Business Class.

If you’re just looking for a better deal on Business Class airfare, then you’ll want to keep the same things in mind that you would do if you were looking for a deal on any airline ticket. Namely:

As you probably know, you’re not the only person who’s interested in getting cheap Business Class airfare – there are entire websites dedicated to this kind of thing. Most of them use the term “First Class” instead of Business Class, but they’re still good sites to cull for information from people who fly “in front of the curtain” more often than not. The Flight Bliss blog, which is part of the First Class Flyer newsletter (you have to subscribe, which you can learn more about here) is probably the best resource. If you subscribe to the newsletter or at least to the blog’s RSS feed you’ll be able to get updates on sales and other timely news.