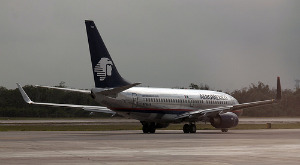 Like many airlines these days, Aeromexico does not offer multiple classes above coach – there is Economy Class, and then there is Business Class on Aeromexico. Also like many other airlines, Aeromexico has a special name for its Business Class service – they call it Clase Premier. The “Premier” theme extends off the plane, as well, as the Aeromexico lounges available at some Mexico airports are called Salon Premier, the airline’s frequent flyer program is called Club Premier, and the whole segment of Aeromexico dedicated to Business Class and frequent travelers is called Mundo Premier.

Aeromexico’s own website says that Clase Premier is “a world of unparalleled luxury,” but as you will see from the information below Business Class on Aeromexico – while comfortable and obviously preferable to coach – is not exactly “unparalleled.” The cabin configuration varies depending on the aircraft you board, so the information below is for a Boeing 777-200 or the new configuration of the Boeing 767-200/300, both of which have the highest level of Clase Premier.