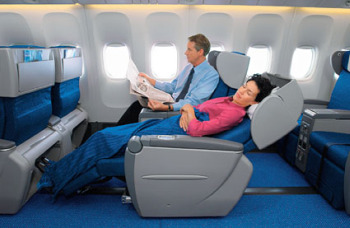 KLM Royal Dutch Airlines may be its home country’s flag carrier, but when you consider the size of the country in question you might not assume it’s that big of an airline. But you’d be mistaken. KLM is one of Europe’s major airlines, and uses one of Europe’s major hubs – Amsterdam’s Schiphol Airport – as its home-base.

But KLM doesn’t just fly within Europe – it covers much of the planet with an impressive route network, and partners with other major carriers to pick up where it leaves off. While true “upper class” cabin connoisseurs may scoff when they hear KLM doesn’t even have First Class on any of its planes, there are enough perks in Business Class on KLM to make it a good option for those looking for a big step up from coach – especially if you’re on one of KLM’s long-haul flights.

In a KLM Europe Select cabin, passengers get more legroom than in coach, and the quality of the food and beverages served is higher (they’re also complimentary). But the seats don’t recline nearly as much as in World Business Class, and you don’t have a menu of three-course meals to choose from, either. In fact, on flights less than 100 minutes, you’ll get only cold dishes served – you have to fly for 100 minutes or more to get hot dishes in your meal box. Depending on the aircraft, you may still have a personal video screen in the seat back in front of you, but the choice of on-demand entertainment is likely to be less extensive.