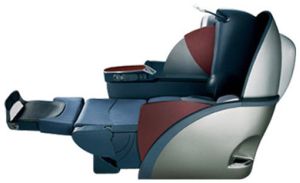 LAN Airlines used to offer both First Class and Business Class services, but merged the two in 2006 to create Premium Business Class on LAN long-haul flights – and many of the features of the seat and cabin service are similar to what you’d expect in the First Class cabins of many other major airlines.