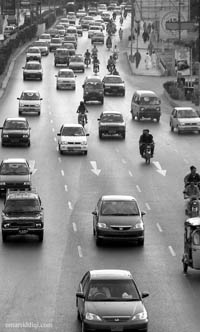 Whether you’re a road warrior or renting a car in a strange city, you’re probably on a tight schedule when traveling for work. So what happens if you rolling in to St. Louis and traffic is at a stand-still (I have to say St. Louis because I’ve been stuck in traffic there more than anywhere and GO CARDS!!)? As long as you’re in the right zip code, traffic.com has you covered on the traffic-front.

With real-time traffic reports available on your PC or cell phone, email alerts, interactive maps, RSS feeds, voice alerts, text messages and an 800 number, there is no reason to get in jam again. And it’s all free. You can check your planned route from the hotel before you leave in the morning. This could have saved me some embarrassment in Chicago once or twice.

The big fat drawback? It only works in major metro areas. So if you find yourself in a traffic jam in Jackson, Mississippi or Boise, Idaho then you’re just SOL.