College Football is Almost Over. Don’t Miss the Game Because of Business 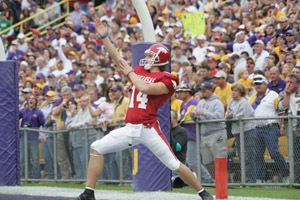 Sick at the thought of missing the big Michigan vs. Ohio State game just because of that stupid business trip? Maybe you won’t have to. Okay, really the only way you’d have to miss THAT game is if you’re out of the country or dead. The point is, a company called LodgeNet Entertainment Corporation is expanding an AWESOME service that I’ve never even heard of until today – Hotel SportsNetSM.

Hotel SportsNetSM offers nationally branded sports programming to hotel guest rooms on a daily subscription basis. Like the pay-per-view packages you can get at home, but for your hotel room. Included now are NFL Sunday Ticket, NBA League Pass, NHL Center Ice, ESPN GamePlan, ESPN Full Court and College Sports TV. Beginning this spring, MLB Extra Innings will be added to the lineup as well.

LodgeNet is planning on expanding service to 1.5 million guests in approximately 76,000 hotel rooms by the end of this year, so you won’t have to miss the bowl games.

Let’s face it, if you TIVO the game, you know you’re going to hear the score before you make it home. So watch it live like normal people.

The only downside? I can’t give you a list of hotels who offer the service right now. I have e-mailed the company to see if I can get a list and I PROMISE I’ll keep you updated.

While you’re at it, vote for Darren McFadden for the Heisman!!

(As a Razorbacks fan, I just had to include the Skinner picture)