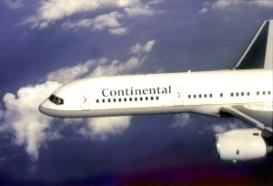 Despite recent findings that business travelers don’t really care about inflight Wi-Fi, more and more airlines are investing in the technology. I really think it’s a benefit to air travelers, although I agree with the Orbitz Business Travel survey that I would not pay a premium for tickets just so I could check my email during the flight.

Continental Airlines is the latest airline to jump on the bandwagon, with its recent announcement of an agreement with LiveTV. Not only is Continental offering email service, though. The airline will provide customers with 36 channels of live satellite-based television programming provided by DIRECTV. Halleluja! If you’re a frequent traveler, you get really tired of the same old entertainment being offered on every flight. The new programming will be available on each and every seat of Continentals new generation aircraft, which also offer passengers with on demand programming. I had the opportunity to take one of the new planes on a recent trip, and it’s MUCH better than the old system in which you had to watch the movie from 3 rows ahead of you on a drop down screen. The only drawback I saw so far was that the games didn’t work. The television service is expected to be available to customers on domestic flights beginning in January 2009.

What sort of programming will you get? Everything…including sports, news, weather, children’s programming and general entertainment. The initial lineup offered through the inflight entertainment system is expected to include CBS, NBC, FOX News, CNN Headline News, ESPN, Animal Planet, The History Channel, Food Network, Nickelodeon, MTV and other popular channels. The inflight entertainment system will also offer a moving map and other stored informational and entertainment content. Access will be free to first class customers and $6 for those of you traveling in steerage.

In addition to the new entertainment programming, Continental will be adding onboard Wi-Fi services with e-mail and instant messaging connectivity offered by LiveTV. No word on the cost of the service, though. According to the press release, “Continental will offer complimentary Wi-Fi connectivity services allowing customers to access e-mail and instant messaging subject to LiveTV being able to offer the service, which is still in the testing phase.” I like free stuff. This is the same sort of system in use by JetBlue, in which passengers can smartphones, BlackBerries and laptops to connect via Yahoo! Mail, Yahoo! Messenger and BlackBerry e-mail and BlackBerry Messenger services.

“Our customers want more inflight entertainment and communication options,” said Larry Kellner, Continental’s chairman and chief executive officer. “We have been closely watching technology developments and are delighted to have teamed up with LiveTV to offer live television programming and communication to our customers.”