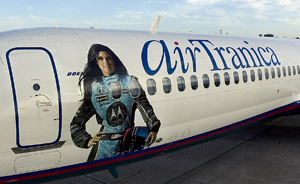 Guys dig Danica Patrick, and who can blame them? She’s hot, she likes to go fast, she’s excelled in a sport where few women dare to tread, and now she has her own airplane…sort of.

AirTran Airways proudly announced a new member to their fleet of Boeing Aircraft, featuring a giant image of Ms. Patrick, called the AirTranica Won. It sounds to me more like a term Adam Sandler would make up than an aircraft I would entrust to carry me around the country, but people seem to like it.

For those of you who are clueless, Danica Patrick recently became the first female driver to ever win an IndyCar Serise, behind the wheel of the 7 Motorola car in the Bridgestone Indy Japan 300 race in Montegi, Japan. 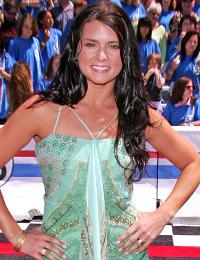 Become a member of Danica Patrick’s Pit Crew at the IndyCar Series race of your choice!

AirTran Airways is offering a choice promotion for you Danica fans out there. With this contest, “one lucky winner and a guest will fly AirTran Airways to join the ranks of Danica’s Pit Crew at select races throughout the 2008 season. You’ll be closer to the action than you’ve ever dreamed.” Imagine…you in the pit at an IndyCar race. What a deal!

In addition, contestants who win trips to the races in Indianapolis, Texas, Ohio, Sonoma, and Detroit will have the chance to share their experience with Danica on the Andretti Green Racing Hour on XM Radio. You may enter as many races as you like, but can only win once. To increase your chances of winning, tell your friends to enter and take you as their guest.