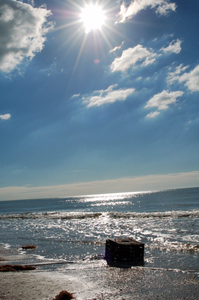 This weekend I had the pleasure of spending a free day in Tampa, Florida. If you ever find yourself with a little extra time in the city, you can make one heck of a day trip. All you need is a rental car and a few bucks for the toll roads.

Now, I’ve spent quite a bit of time in Tampa in the past, visiting the various beaches and Ybor City bars. This, however, was my first time in the city in the winter. I was surprised at the number of snow birds and vacationers visiting the area. If I were going on VACATION at this time of year, I’d certainly go further south. Someplace like the Caribbean where you can actually get in the water at this time of year.

For the conventioners and business travelers of the world, here is how to make the most out of an extra day in Tampa.

First, get up early, get in your rental car and head north to Crystal River or Homossasas Springs for a manatee tour. Yes, you can see the manatees at the Tampa power plant but you don’t get the same hands-on experience you do in the other locations. This is a winter activity, as the manatees only spend the winter months in the springs mentioned. Why? Because the water is a constant 72 degrees, and the mammals have to keep warm.

I made the trip with Sunshine River Tours, which ended up being a decent operator. I chose this company in particular for two reasons: Homosassas is a little closer to Tampa, which made my driving time a little quicker and Sunshine River has tours beginning at 9:00 a.m. In my research, I found that most tour operators depart at 8:00 a.m. Frankly, I just didn’t want to get up an hour earlier to make the drive.

The tour began with an informational video about manatees and how to act appropriately when interacting with the animals. You cannot, for instance, enter the sanctuaries or grab the animals with both hands. All good information. You are provided with a wetsuit and a disposable digital camera. I haven’t developed my photos yet, but I would imagine the images are crap because of the bad water quality. I found that manatees do not like bubbles caused from scuba equipment, so snorkeling is the preferred way to interact with the animals.

At that point, you’re loaded up on a bus, and driven the approximately eighth of a mile to the boat launch. The boats are pontoons with outboard motors. I found it amazing that any type of propeller is authorized in these waters where the endangered species live. It was quite sad to see the animals habitat being further degraded by the construction of a new multi-million dollar housing development in the area. All with private boat docks, of course. 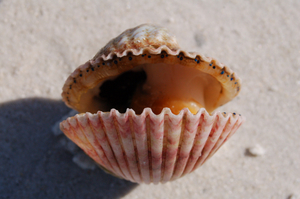 Upon arrival at the site, the tour operator gave us more information about the animals. The we were set loose in the water. Seventy-two degrees may sound warm, but that water is CHILLY. I paddled around for a few short minutes without seeing anything beyond the algae in the water. Suddenly, there was an enormous beast in my presence. I actually screamed. How amazing! It passed by and I went in search for more. Before long, I made friends. I had the undivided attention of not one, but two large manatees. Believe it or not, they really do like to have their bellies rubbed. If you scratch them beneath the fin, the enormous mammals will, in fact, roll over. So amazing!

For a while, it was non-stop manatee action. I swam back up river from those two, as I had drifted quite a bit. One of the two actually came back to me. It was hard to believe, but it had the same two barnacles on the left side of its head.

The cold finally got to me and I returned to the boat. The operator was waiting to bring my towel and offer hot chocolate. After changing, I stood in front of the heater and felt like a million bucks.

From Homosassas, I made my way back toward Tampa, stopping at Subway for lunch. There were loads of restaurants around the springs, but I was ready to get on my way. Before long, I was searching for parking in Clearwater Beach. It was far too cold for my bikini, but a great afternoon for a long walk.

What a walk! The water was really cloudy and un-postcard like that particular day. There must have been one heck of a storm at sea to make the water look like a fishbowl and to wash up all of the creatures I saw. Along the shore, there were live scallops, sea urchins and even a tiny octopus. If you like to collect sea shells, and I personally am in training to become on of those old ladies who constantly comb the shore, this is one great location.

To end the day, I watched the sunset while sipping a really stout margarita as Frenchie’s on the beach. At only $4.50 a pop, this drink is one of the best beach bargains I’ve ever come across. For dinner, I sampled one of the January specials that consisted of scallops with peppers, onions and tomatoes, cajun style. It came with a small loaf of french bread. The food wasn’t stellar, but at about $8.00 for a portion large enough for my dinner, it was a bargain as well.