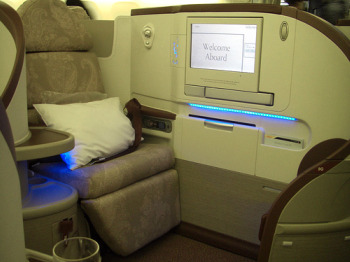 Do a simple search for Business Class airfare and you might be surprised at how much some airlines are charging for those tickets. While some travelers may be content to pay full price – or not even know they have a choice – savvy travelers know that sometimes all it takes is a little research to find discount Business Class fares.

In this article we’ll go over some of the best tips for finding discount Business Class fares. You may not be able to save 50% or more on your ticket (sites that promise such savings tend to be highlighting a few rare cases rather than the norm), but you’re likely to save several hundred dollars on your airline tickets. And if you can get essentially the same ticket for $500 less than the first advertised price you see, why would you pay more?

You might be a frequent flyer who’s loyal to one particular airline, or to one airline alliance. If you’re trying to save some money on your Business Class airfare, however, you could be missing out on a better deal by ruling out traveling on a different airline. Many of the big legacy carriers tend to come up with more or less the same fares on most routes, so to scout out the better deals you really need to cast a wider net.

Using airfare search websites is one option, as long as those sites include a variety of airlines. To be sure that you’re not overlooking some airlines that are unfamiliar to you, it’s also a good idea to check out the websites of the airport you’re flying into to see what carriers serve that airport – and then check those airlines’ websites to see what their fares are.

On well-traveled routes out of major airports – New York, Los Angeles, Atlanta, etc. – you’ll find there are many more airlines to get you where you want to go than you might have thought. And since those airlines are not as well known, their airfare tends to be lower – even on Business Class fares.

One great way to find discount Business Class fares is to make sure the airfare search sites you’re looking at work with consolidators. What consolidators do is akin to buying in bulk – they work with airlines to have large quantities of airline tickets available to sell at lower prices than the airlines themselves typically offer. You’re more apt to find consolidator tickets to have significant savings over regular tickets when you’re traveling internationally or – as is important for this article – in Business Class or First Class.

Some of the airfare search sites that work with consolidators, however, don’t even have the lowest prices available on airfare. For those, you may have to talk to a travel agent who specializes in consolidator tickets. The number of real-live travel agents may be dwindling in the internet age, but if you’re really trying to save money on your Business Class ticket then it may behoove you to seek out a travel agent to find out what kind of savings they can offer you. Just be sure you know how much said travel agent makes on commission.

Look at Prices on Round the World Tickets

If you found out you could fly Business Class to 2-3 destinations on a ticket that would cost less than the simple round-trip Business Class ticket you were looking at, wouldn’t that sound appealing? We thought so. As ludicrous as it sounds, there are multi-stop tickets – otherwise known as round-the-world tickets – that will cost you less than a basic round-trip ticket, even in Business Class.

There are typically lots of restrictions on a RTW ticket, including a requirement that you continue traveling in one direction (eastward or westward) from your departure point, but if a round-the-world ticket cost thousands less than a round-trip ticket we think you’ll agree that it would be a tantalizing problem to have. Your trip from LA to London could turn into a LA – London – Dubai – Hong Kong – New York route, and it could still cost less than just a trip from LA to London and back.

Find Out What Credit Card Benefits You’re Entitled To

The fine print of your credit card benefits doesn’t exactly make riveting reading, but this might be a good reason to get out a magnifying glass to see what exactly is in that fine print.

If you can’t negotiate your way through the fine print or find what you’re looking for on your credit card company’s website, then call the credit card company directly and ask about whether discount Business Class fares are available through one of their partners.

In many cases, buying the frequent flyer miles you need to make up the gap between what you have and what you need may be significantly cheaper than buying a ticket outright. Buying frequent flyer miles is generally most cost-effective when you’re going to be using them on long-haul flights, but the cost of buying blocks of miles will vary depending on the airline and the number of miles you’re buying.

When your destination is an international one, you may find that buying two one-way tickets is cheaper than buying a round-trip ticket. For reasons that are unknown to anyone other than the airlines, the prices on tickets flying from foreign countries into the US are often cheaper than the same exact route flying in the opposite direction.

This means that if you’re planning a trip from LA to Paris, you’ll want to search for one-way flights from LA to Paris and then from Paris to LA. You can look at different airlines for each leg, especially European airlines for the flight out of Paris, and potentially save $1000 or more on the total cost of your trip.