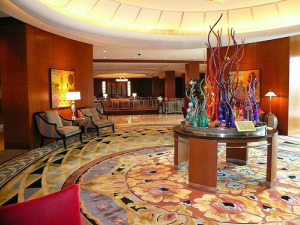 Stories about the economic slump are pretty much old hat by now, and frequent business travelers know perhaps better than anyone else how the downturn impacted the travel industry. There have been more planes taking off with empty seats, or fewer planes flying so the airlines could fill them. There have been more last-minute deals on flights and hotel rooms because it’s better to make a little money on a seat or a room than no money at all.

Even though there are reports that the economy is finally slowly improving, it’s still a bit surprising to read about new hotels or airlines opening up for business, or about any company in the travel sector expanding. But that’s precisely what’s going on.

Reading through two recent stories in the New York Times is like going back in time to when the economy was booming and travel felt like a right, not a luxury. Y’know, the good old days.

At the end of January there was an article about how airlines looking to expand their routes – or even just the number of flights they offer at airports they already serve – are finding it difficult to get the additional runway and terminal space they need. More often than not, it’s the big legacy carriers that have monopolized the country’s airports, and it’s the smaller (read: budget) airlines that are unable to expand. And this is despite the fact that it’s those very budget carriers that are the only ones making a profit right now.

For the most part, the budget airlines have chosen to set up shop at airports that aren’t dominated by legacy carriers – like, as the article says, Southwest Airlines having more of a presence at Chicago’s smaller Midway Airport as opposed to the giant of O’Hare. And for the time being, that may be perfectly fine – but at some point even those airports aren’t going to have any extra room for expansion, either.

Another article from about a month ago talks about all the new hotels opening up around the country. It sounds like utter craziness to be opening the doors on a brand new hotel – even in big travel markets like New York, Atlanta, and Miami – until you consider how long ago the plans for these hotels were conceived and when construction actually began. Those were rosier times, to be sure.

Unlike the struggle of airlines to expand their routes, however, having a bunch of brand new hotels flooding the market could be great news for travelers. At a time when established hotels are sometimes having trouble filling their rooms, this could mean that there will be even more discounts and last-minute bargains available. New hotels tend to offer “grand opening” specials that are hard to beat, but older hotels may try to compete by lowering their prices more than usual. If your travels will take you to the cities listed in the NY Times article (the ones with a bunch of new hotels opening up) in the near future, it’s absolutely worth it to shop around – and try to bargain with hotels if you’re finding one is offering a killer deal.