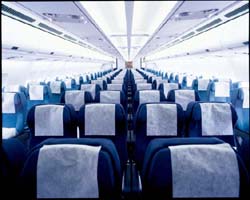 Lateral Class is a crafty plan that I’m now a big supporter of, but I can’t claim credit for the idea. What the heck is lateral class? The International Herald Tribune recently reported (and coined the phrase), lateral class is when a passenger buys several seats in a row to be able to raise the arm rests and stretch out to sleep at night. If you’re able to get an inexpensive tickets or cheap international tickets, this can actually cost far less than upgrading to business class. So if your employer won’t spring for business class, maybe you can convince him or her to do this.

A prime example is flying from New York to London. Four economy class seats will be approximately $2000, where a single business class seat will set you back $4000. That’s a big chunk of change and if you’re a slave to expense reports it may be the deciding factor for whether you will or will not sleep that night.

Airlines know people do this. So be sure when booking your flights the airline understands this is your intention and the seats are in the same row and don’t span the aisle.

The major downside is that with many airlines you can only earn miles for one seat per flight. I’ve found that frustrating when booking several seats for myself and co-workers who don’t participate in the frequent flyer program. Why shouldn’t I get the miles if I paid for them?

My happiest overseas flight was between Memphis International and Amsterdam when I had a three person row all to myself. It feels like the luxury highway lanes Kramer briefly introduced on Seinfeld. From now on, I going to consider lateral class when flying at night.