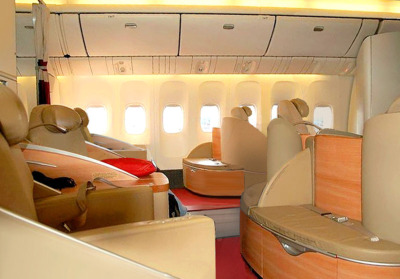 If I tell you that First Class on Air France isn’t called First Class, you might be surprised – until you hear that it’s called “La Première.” Then it all makes sense, right? France’s national airline gives French names to all its cabin classes, and although there are four classes above Economy (or “Voyageur,” as they call it), it’s La Première that’s the top of the heap.

With only 4-9 seats in La Première class (depending on the plane), you can bet that Air France‘s attention to detail is superb. As they say, the cabin is more likely to feel like a “private lounge” than a cabin on an airplane. Unfortunately, Air France’s La Première First Class is only available on certain Boeing 777-300ER and Boeing 777-200ER planes – and what’s more, what’s known as “La Première at the airport” is only available at Paris Charles de Gaulle Airport. At CDG, you can take advantage of the services of a porter to help you with your bags and take you to the La Première lounge. In the lounge you can enjoy a leisurely meal in the dining room, catch up on some work with the comfortable desks and chairs, or even get a free 30-minute spa treatment. At other airports, you’ll still get preferential treatment with things like priority boarding, but it’s nothing like getting a free half-hour massage.

This is a breakdown of what you can expect in a La Première First Class cabin on Air France.