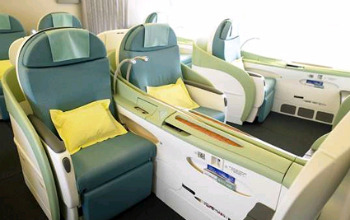 Korean Air is one of many airlines currently undergoing an upgrade in its First Class service, and from the look of the new First Class cabins you should be very pleased if you get on a plane with the upgraded seats. But still, even the old First Class on Korean Air is quite nice – and the service itself is going to be consistent across any flight, whatever the cabin configuration.

One step up from the Kosmo Sleeper Seat is the Kosmo Sleeper Suite – but these “suites” are, as the Korean Air website says, “dedicated to VIP passengers.” The seats are even longer when fully reclined than the Kosmo Sleeper Seat, and more than 5″ wider. Between the partial shell enclosing the seat and a retractable screen, each seat can become like a mini-suite with a remarkable amount of privacy. Each “suite” has a 23″ LCD monitor with the same on-demand programming listed above, and “suite” passengers get Bose noise-cancelling headsets.

One step down from the Kosmo Sleeper Seat is Korean Air’s First Class Sleeper Seat. These seats are more akin to what you might find in a First Class cabin on a domestic flight – the seats are wider than in coach, they recline further (but not to a fully-flat position), and there are personal entertainment systems at each seat.

With the Kosmo Sleeper Suite, you can expect the level of service overall – including the amenities and the meals – to be the same as what’s outlined above. On flights with the First Class Sleeper Seat, however, the number of amenities and quality of the meals isn’t likely to be as high.