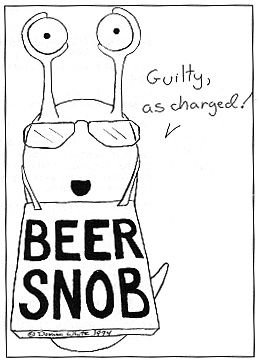 This may be a sad day for those of you who read my post some months ago about the Chief Beer Officer position available through Starwood Hotels. The finalists have been chosen. So if you haven’t been selected, it’s time to stop holding your breath.

The fun part is that you can now vote on who will be hired as the Chief Beer Officer. If you’re a Four Points customer and you LOVE your beer, you might want to check out the profiles and get your vote on. This vote will determine who is choosing the brew you’ll be sipping on future business trips.

With two finalists hailing from California, it looks like the state can no longer just be considered wine country. Brad Ruppert from Huntington Beach might be a Certified Information Systems Security Professional, but he’s also clearly qualified to talk about Best Brews’ extensive beer portfolio, having consumed 2,800 different beer varietals in the past decade and visited 340 breweries/brewpubs in 19 countries. Web developer Chris Nelson, meanwhile, holds hops close to his heart in Carmel Valley, with two dachshunds named Porter and Stout. Nelson has spent immeasurable hours in a bar where his wife worked in order to sample their local beers – and of course to spend more time with his spouse.

Although she keeps busy as Brewmaster at Squatters Pub Brewery, Jennifer Talley is also the Research and Development Director at the Salt Lake Brewing Company in Utah. In her spare time, she attends numerous beer festivals and has received several medals from the Great American Beer Festival and World Beer Cup.

“I believe this to be the craft brewing revolution, and it has been my mission in life to spread our gospel wherever I can,” said Talley. “The Best Brews program has a strong emphasis on crafts, and so I immediately jumped at the chance to apply when I heard about the CBO opening – it’s a dream job.”

Last but certainly not least, Scott Kerkmans from Phoenix, Arizona, has dedicated both his private and personal life to beer. This former Head Brewer / Brewery Manager has spent the past year starting and growing a national lifestyle magazine dedicated to beer and beer culture, in which he reviews this glorious libation on a weekly basis.

You can see the video application and profile of each wanna-be CBO at www.fourpoints.com/cbo. Vote for your favorite at that site.