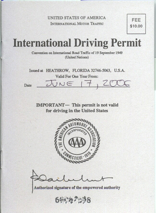 I just read a press release from AAA warning U.S. residents who plan to drive while traveling abroad to avoid purchasing fraudulent International Driving Permits (IDP) over the Internet. To be frank, I always rely on public transportation when traveling out of the country, partly because it’s much less stressful, and partly because I like to leave my license back home to use as positive ID if I’m robbed or my wallet is stolen, so I didn’t know this was a problem for travelers. Apparently so, though a valid U.S. driver’s license is the only required document for rental cars in most countries.

International Driving Permits and Inter-American Driving Permits (IADPs) are official translations of a your driver’s license for use when driving in another country. According to the press release, AAA and the American Automobile Touring Alliance are the only two organizations authorized by the U.S. State Department to sell the documents to valid U.S. driver’s license holders.

An IDP costs $15 when purchased from AAA and can be purchased by anyone 18 years or older who
presents a valid U.S. driver’s license at any AAA offices around the country.

“A fraudulent IDP or IADP could result in legal problems or travel delays if a person is detained while using it to drive in a foreign country,” said Doug Bower, vice president of Travel for AAA. “People who
buy them from fraudulent online brokers and spam e-mailers are wasting their money.”

The Federal Trade Commission’s consumer alert on IDPs can be found at
https://www.ftc.gov/bcp/conline/pubs/alerts/idpalrt.shtm.