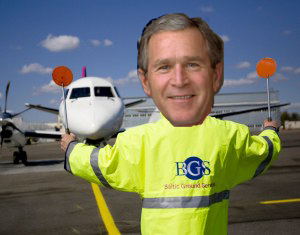 Yesterday the Prez, yes I’m talking about George Dubbya, made a big promise. He said that he will begin a campaign to relieve airport traffic and help travelers who are forced to spend “endless hours sitting in an airplane on a runway.” NYC airports came under fire in particular, which is no surprise considering the lengthy delay times at the three.

George is really getting personally involved in this project. He directed his transportation secretary to meet with airlines, airports and consumer groups in the metropolitan area to come up with a plan by year’s end to reduce growing flight delays and airport gridlock. Good plan.

“We’ve got a problem, we understand there’s a problem, and we’re going to address the problem,” he said. Sounds like the game from Super Troopers. Or 911 Tourettes from the Daily Show. Problem.

Immediately after meeting with Bush, Transportation Secretary Mary Peters announced she had formed a committee of stakeholders to look at “bold” ideas to reduce congestion, such as charging airlines to land at the busiest times of the day.

Mary Peters, the Transportation Secretary, said the NYC airports, including JFK, LaGuardia and Newark, account for 3/4 of the aviation system’s delays, and cause a “ripple effect” on the rest of the country because 1/3 of the air traffic in the country goes in to, out of, or over the region.

I’m looking forward to the fix.