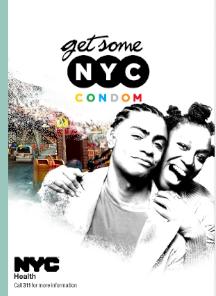 These days you can score a new souvenir from the great city of New York, with the newly packaged NYC branded condoms on offer from the Get Some New York safe sex campaign. Hell yes! Guess what the new slogan is? Get some.

The campaign will feature new posters, banners and TV ads, which sure beats the hell out of that 877-393-4448 cable commercial they keep playing in Jersey. For that matter, it beats taking home some creepy crawly unwanted souvenir from the Big Apple.

You can find the free condoms at 200 places around the city. Okay, so they’re REALLY designed to keep New Yorkers from getting the hiv (or something else), but they make a nice gift for business travelers to the city as well.

Yves Behar, the designer of the new packaging, remarked, “Good design can help bring condoms out of the closet. The brand’s friendly design and the dispenser’s approachable shape convey openness and acceptance. They say condoms are nothing to be embarrassed about.”

The new TV ads are set to hip hop and Latin music, and display landmarks around the city. Obviously, they are geared toward the younger set. According to Fox News,

The new video ads feature colorful images of city landmarks and are set to hip hop, jazz and Latin beats. They will air in English and Spanish on cable and broadcast TV as well as radio, according to health officials. Display ads are also appearing in more than 1,000 subway cars, as well as on phone kiosks and in check-cashing outlets.

So I don’t see how you could visit the city without running in to one of the new ads.

More than 36 million condoms have been distributed in the past year. So, that means every New Yorker could have SAFELY “gotten some” once every 3 months for free! Kidding. I sincerely do hope the campaign is doing some good.

Want to know where you can get some? Check the list.