Business travelers tend to be wired travelers – we’re the ones for whom finding hotels with free WiFi is more important than finding hotels with good water pressure in the shower. But if you’re looking for more on the technology front than a desk and a chair and a place to plug in your laptop, then you’ll be pleased to know there are some hotels that are stepping up to the challenge of the 21st century.

The fine folks at Tablet Hotels recently sent out a list of some of their favorite innovative hotels in the world, and we wanted to highlight a few of them. If your business (or leisure) travels take you to any of these cities and you’re a fan of boutique hotels in general, then these may be just what you’re looking for.

The coolest part of this hotel from a tech perspective isn’t restricted to the experience of being inside the hotel. In fact, it’s just the opposite. In the Hotel G, every single room’s windows have LED lights in them with an array of colors guests can choose from. Not only will the light create a particular colorful glow inside your room, it will also light up that window so that passers by outside the hotel see the color, too. The result is a bit like a video game (especially at night), but there’s no denying that it’s eye-catching. 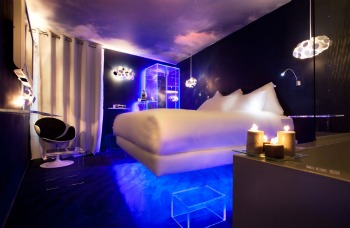 There are quite a few unique hotels in Paris, including several that are more on the modern end of the scale, but the Seven Hotel takes it a step further. There’s neon-bright mood lighting in every room and bathroom, but these rooms are a feast for the nose as well as the eyes. That’s right, there are “olfactory channels” that adjust the scents in the room just as the mood lighting adjusts the glow. We’re not saying the rooms are so cool that you should stay in them instead of exploring Paris, but if you chose to hang out in your room longer than usual no one would be able to blame you. 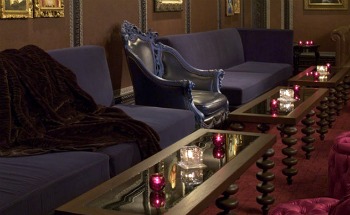 We’ll grant that much about the Hotel Sax is decidedly old-fashioned looking, and that most of the rooms are no more high-tech than any other well-equipped hotel in the modern world. But let’s just say your business trip to Chicago is set to morph seamlessly into a family vacation – what better way to play than to get the “Technology Suite,” complete with a home theatre system that includes “Rock Band?” While the kids are playing their video games, Mom and Dad can slip downstairs to the Crimson Lounge and order custom cocktails without getting up from their tables using the hotel’s TouchLife tablets. See? Something for everyone. 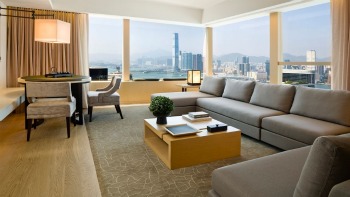 There’s nothing about Upper House – including the name – that suggests anything but luxury, so it shouldn’t be surprising that the hotel offers high-end tech tools as well. For those of you flying into Hong Kong and going directly to the hotel, you can arrange for transportation in a hotel car that’s equipped with WiFi. Once you’re at the hotel, don’t worry if you happen to be a BlackBerry user – you’ll get an iPod Touch to use during your stay that serves as a direct connection with the hotel staff (including room service) no matter where you are in the hotel.

These hotels were featured in a newsletter from Tablet Hotels, which specializes in boutique luxury hotels.