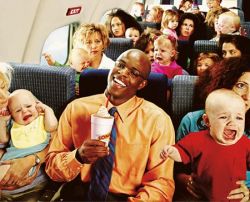 The following story won third prize in our recent travel writing contest. Congrats, Malia! I can TOTALLY sympathize with your plight as I’ve recently decided I am allergic to babies, particularly on airplanes.

Why is it that on an entire plane full of normal, quiet people, the one family with a screaming two year old is inevitably seated across the aisle from me? What do you do when your plane is hijacked by a two-year-old devil-child? I watched in amazement at first as the mother and daughter faced off in a battle of wills on whether the window shade should be open or closed.

The plane begins its initial descent to Paris and the shrill, nails-on-the-chalkboard screams only intensify. The flight attendant coos to the child consolingly and offers chocolates if she’ll just take her seat like a good little girl for a few minutes. The overweight German woman in the seat behind them shoots evil looks at the oblivious parents and plugs both ears with her fingers. The parents look hardly alarmed that their child is annoying the entire plane. The father speaks to the child as if she is a rational adult while stealing glances as his expensive watch and fingering his Armani aviator shades. The mother then decides to ignore the little girl, prompting another round of shrieks, reading the society pages instead and pretending not to hear.

I thought this plane was headed for Paris, but it’s obvious that my destination is hell.