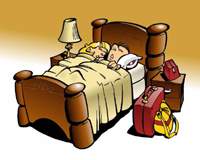 DoubleTree is going to Tianjin, China in late 2007.

Embassy Suites has moved in to the Huntsville, Alabama market. I bet all of the rocket scientists are jumping for joy.

Hilton Garden Inns will be expanding to Charlottesville, Virginia. They also recently opened the Hilton Garden Inn Florence Novoli in Florence. So you can rack up those HHonors in Italy if you want.

Marriott plans on expanding by 120,000 rooms over the next two years. Pretty ambitious.

Radisson has announced 2 new bed and breakfast packages. Beats the heck out of driving through Mickey Dee’s in the morning.

Starwood has agreed to operate the Sheraton Bratislava Hotel in Slovakia.