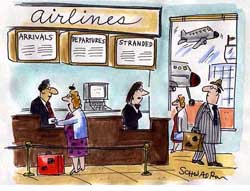 This is airline news for the business traveler. If you’re looking for discount deals (unless it’s just REALLY amazing), earnings reports, traffic reports, acquisitions or personnel changes, you won’t find them here. There is just too much CEO swapping for me to keep track of all that, so I’m going to concentrate on what affects us as business travelers.

AirCell, an airborn telecommunications systems company based in Colorado, has been awarded a FCC license to begin producing new broadband services for aircraft.

Boeing’s new Dreamliner 787 promises to clean up the air in-flight with a new cabin air system.

EasyJet apparently has a problem with making their payments. This is one airline where giving up your flight because of overbooking SHOULD NOT be done. [Any volunteers for a battle with easyJet?]

Eos Airlines will be expanding after its first year in service as a premium class airline with an additional New York to London flight. Other European and American destinations are being considered as well.

Read our review of oneworld’s round the world plane tickets and leave one of your own.

RyanAir, the European discount airline, will do anything, from selling you airport parking to giving you a personal loan. Their website reminds me of the home shopping network.

Singapore Airlines will offer you the in-air equivalent of a 5 star hotel room, if you have $10,000 to spend.

United Airlines will let you save 15% off your next rental and earn TRIPLE MILES with Budget Rent-A-Car at participating airport locations through June 30, 2007.