How to Find Free Airport WiFi

The must-have perks of business travel have changed over the years, but one that’s consistently ranked among those things that travelers will gravitate toward these days is free WiFi. Having access to free WiFi in an airport means you can get something done in what might otherwise be lost time, and it also provides a source of entertainment during a long layover or unexpected flight cancellation. I know many travelers who will forgive countless other airport sins – mediocre or overpriced food, for instance – as long as there’s free WiFi.

Thankfully, more and more airports are adding free WiFi to their list of amenities – and many of the airports that had the temporary free WiFi Google gifted travelers during the 2009 holiday season have picked up where Google left off. But we’re still not in that Utopian travel world where every airport has free WiFi.

There are a few resources out there to help you find the airports that have free WiFi before you travel, which is handy. If you’re stuck traveling through an airport without free WiFi, there’s not much to be done about it – but at least you’ll be prepared.

My favorite resource for finding airports with free WiFi is the map at Jaunted. Not only is it graphic (and therefore easy on the eyes), all the airports in Jaunted’s system are plotted on a world map so you can easily locate the part of the world you’re traveling to. The folks at Jaunted are constantly updating the map based on their own experiences and tips from readers, so if there’s an airport missing from their map definitely let them know. 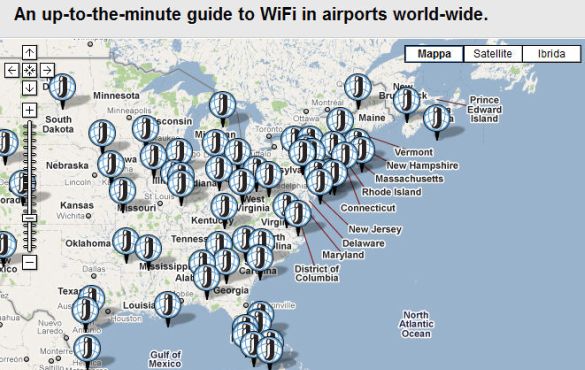 For a less graphic-centric list of airports with free WiFi, you have a few options.

Knowing which airports offer free WiFi is great, but what about the ones that have WiFi that’s available for a fee? This TravelPost airport WiFi guide includes all that information. There are lists of U.S. and international airports, along with their WiFi status – whether it’s free or fee-based (and how much it costs if it’s not free), and where the hotspot is (if it’s not throughout the entire airport). You can also easily see who the WiFi provider is, in case you have an account with one of the fee-charging providers. 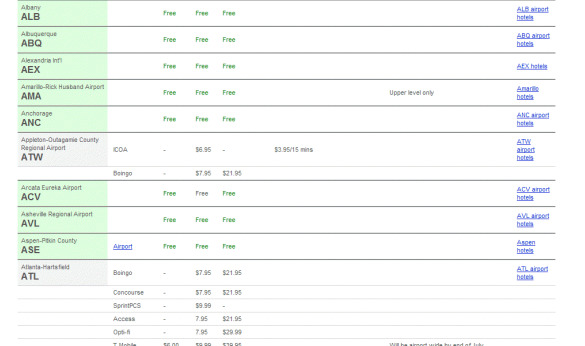 The SmallBusiness.com site has a wiki-style list of airports offering free WiFi – like any wiki, it’s not necessarily going to be a complete record since it’s based entirely on user submissions. But it’s a good start – and you could add to the list easily, as well.

The WiFiFreeSpot website is trying to be a resource for all kinds of places with free WiFi, not just airports – but there’s an airport section of the site that lists the airports site managers know of offering free WiFi. The U.S. section is broken down by state, with links to airports where information is available. It’s not the best resource, but perhaps it’s getting there.