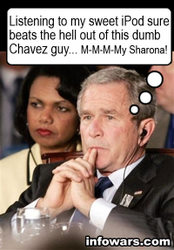 New York is considering banning the use of iPods in the crosswalks of New York, as a result of several traffic accidents that were caused as a result of pedestrians listening to iPods. Wow. That’s got to be the second greatest dream of a marketing department (after brand recognition such as any soda is a Coke in the south or any cotton swab is a Q-Tip), having major companies such as airlines alter their product to accomodate yours and having legislation set in place regarding your product. The airlines don’t say “mp3 stations” or (apparently) “mp3 law,” they say things such as “iPod stations.” That’s really interesting to me.

The proposed fine will be $100.00, that’s the same as the fine for drivers talking on cell phones.

So if you’re jammin’ in New York, you may want to take it off in the crosswalks.