If These Walls Could Talk – Kayak.com Hotel Survey 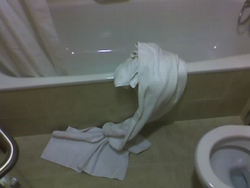 Kayak.com just conduced a poll of 1,141 travelers about their experiences in hotels, with some fantastic results. Just a little food for thought the next time you check in to the Marriott on your business trip.

66% percent of respondents have booked a hotel room purely for a romantic rendezvous. Oh behave. In addition, more 25% confessed being in a hotel room makes them feel “randy.” I wonder what free channels are causing those emotions? 45% believe it’s a-okay to shack up for a weekend after three months, 27% saintly respondents would wait six months. 9% admitted to ever having booked a hotel room by the hour. I bet they just wanted a nap.

I’ll skip the statistics over which celebrities the people want to shack up with. And the part about what people are swiping from the rooms. It just isn’t that interesting.

The fun part is the answer to “What is the strangest thing you’ve found in a hotel room?” Most people responded with other people. I’ve had that happen before. The poor girl was in the shower and thought I was someone named John. Got an upgrade to an ocean view suite. But these are more interesting.

I’m surprised no one ever found a passed out Keith Richards. Have you found anything strange in your hotel room?