In the Insecurity Business. DriverGuard will Protect You from All the Scary Locals when Traveling Abroad 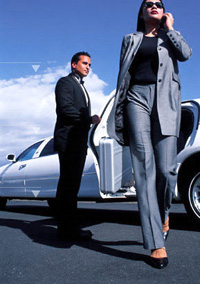 What have we here? A service that plays on the anxiety felt by millions of westerners in the face of traveling to some un-civilized destination for business. It’s a lot like the scare tactics Volkswagen uses in their marketing campaign for the Safety Crash Ratings for their vehicles. You know the commercials – where happy-go-lucky people are driving along and BAM they get in a crash, but they’re okay because of the Jetta’s superior engineering. I don’t mean to pick on Volkswagen, I actually want a Jetta. I’m not sure the fear factor works, Fat lot of good the scary videos in drivers-ed have done most people.

I’m not in advertising, but I would imagine fear is the number two seller of consumer products and services (behind sex, of-course). I’ve been robbed before for being a light-haired, blue-eyed traveler abroad, but with a little more information it could have been avoided. So instead of hiring G.I. Joe to drive me around on my next vacation, I’ve tried to get the information out to as many people as possible (like through the link above). I just don’t know that it’s worth hiring the militia to feel secure when you’re at a red light.

Here’s some advice that’s worked for millions of travelers. Be anonymous. Take off your rolex, leave your Treo in your pocket, use one of those geeky under-the-shirt passport holders and don’t be the obnoxious American. If you ACT high profile, you’re more likely to be a target. Do your research. I’ve used BootsnAll in the past to get destination-specific travel information. They aren’t necessarily business related, but you can learn useful tips such as:

I’m not saying every place in the world is super-safe for Americans. Mr. Bush has done a fantastic job of making hundreds of thousands of people around the globe despise us as a people, but hiding behind some FBI flunkie sure isn’t going to help matters in the long run. There probably are a FEW places in which extra security is needed. Check the State Department warnings for the location before you go. If it’s that dangerous, maybe you could teleconference instead. If you’re really concerned, go ahead and contact DriverGuard.