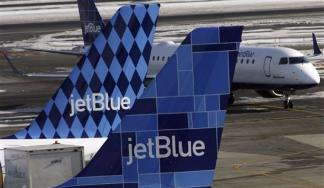 JetBlue is testing out FREE Yahoo! email and IM services on one of its planes. Don’t you wish you knew which one when you’re booking? Me too. This test is in response to continued demand for internet services in the air. And leave it to good ole’ JetBlue to make it F-R-E-E. Yes the service will be limited to the two applications listed above. Before you start whining, know this. The airline is restricting the access because of limited bandwidth. Unfortunately, you will not be able to view email attachments with this service. So don’t count on catching up on ALL those forwarded YouTube videos your friends keep sending you.

To further limit the test, JetBlue has entered a deal with Research In Motion (the maker of the Blackberry) to only offer the service on two Wi-Fi enabled Blackberry models. The two usable models include the the 8820 and the Curve 8320.

The test-craft is an Airbus A320. This particular aircraft is called “BetaBlue” as it is used to test any new entertainment services offered.

Brett Muney, JetBlue’s general manager for product development, said the airline received certification from the Federal Aviation Administration to use the system on A320 aircraft, so its all on the up and up.

As always, the use of portable electronics, including laptops and Blackberrys will have to be turned off for takeoff and landing. You’ll have to keep it in airplane mode, with the cellular part of the Blackberry disabled at all times.

According to the MSNBC article, “Chris McGinnis, editor of quarterly industry report Expedia Travel Trendwatch, said business travelers in particular would want in-flight access. He said the restriction to Yahoo e-mail could limit the system’s usefulness, but passengers can always forward their corporate e-mail to a Yahoo account when traveling.” I’ve had email forwarded to all types of services, and this can totally work. You should even have the ability to set up your account to show your business signature and regular email address on sent items.

American Airlines has been threatening to test inflight wireless for some time, but JetBlue has beat them to the punch. No word on what the cost would be per flight if the test is a success and JetBlue implements it on other flights.