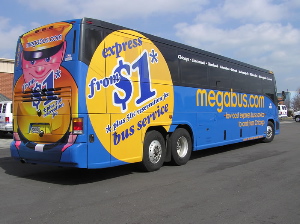 Megabus, the British bus carrier that has moved in to the U.S. territory, is offering one heck of a deal for those of you in Southern California. If you reserve ahead, you can get a one way ticket from Los Angeles to Las Vegas for a buck. For real. Even if the one smacker tickets are all taken, a one way ticket will still only set you back $8. So if you lose your…money in Vegas, all you have to do is dig that extra dollar out of your shoe to get back home.