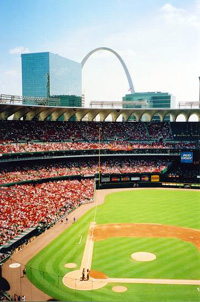 It’s really funny to distinguish between the past and present homes of the St. Louis Cardinals by using the names Old Bush Stadium and New Busch Stadium. It’s just like New Christine and Old Christine in The New Adventures of Old Christine with Julia Louis-Dreyfus. But that isn’t the point. Many times, baseball games are perfect for the business traveler. They usually happen at night, you have an assigned seat so you aren’t wondering around by yourself and it gets you out of the hotel.

The Cardinals are going strong in September, so it isn’t too late to get your first gander at the new and improved Busch Stadium in St. Louis this year. They’re still packing the house so tickets may be a little hard to come by. I’m more of a Braves fan, but as long as the Cards beat the Astros mercilessly I’ll be a happy girl. So, the new stadium. I went in March and it was okay. I think there is a little problem with the gentrification of baseball stadiums. All of the new ones look pretty much exactly alike. I had, like thousands and thousands of other people, really fond memories of the old Busch stadium. It didn’t seem like it was in that bad of shape, not like the Vet was in Philadelphia the year before it was imploded. If you’re a long time Cards fan and you’re looking for the new stadium, it’s easy to find. It’s right across the street from the site of the old stadium. Seriously.

What is the best deal in baseball? The party seats. They’re a far cry from the $10.00 nosebleed seats that I’ve always been drawn to by the price, but they really make a lot of sense when you get down to it. These boxes are on the second level of the outfield in Busch Stadium. Ticket prices are $90.00 each, BUT that includes all the food you want and all the beer you can drink. If you tend to put away the booze, this is an AWESOME deal. Warning: they do take the food away pretty early in the game (5th or 6th inning) so be sure to get it while the getting is good. The beer lasts a little longer, maybe to the 7th. Know what else is good? You’re in the shade. There is nothing better than being in the shade if you’re at a game on a 90F + day in St. Louis. If you make it this season, you should be able to get a shiny Inagural Season pin. I cherish mine with all my heart.

The shadows on the field of New Busch Stadium are pretty strange in an afternoon game.

A little nostalgia. My favorite time at Old Busch Stadium was in 2004. We watched the Cardinals beat the Astros in Game 6 of the NLCS at a bar at home in Little Rock, Arkansas. A friend of mine had two tickets she was willing to part with at face value, based on her belief the Cardinals would win Game 7 and go on to the World Series. We got the tickets, got cheap airfare from Southwest, told the boss we HAD to go (who could argue with that?) and were on our way. The Cards, of course, pulled it off and we got to see it all. What girl doesn’t want to see Albert Pujols celebrating?