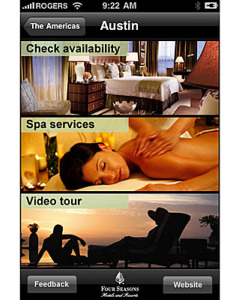 We’ve all heard the “there’s an app for that” ads for iPhone applications, and the numbers of how many new apps are added to the app store each day is staggering. So it’s a good thing I got a press release about this new app from the Four Seasons or I’d never have known about it.

With the new Four Seasons app – which is free, by the way, so no excuses for not downloading and testing it out – you’ll be able to find an available room at any Four Seasons property worldwide, check out the various menus for spas and resorts at any Four Seasons, and (if you aren’t booking a trip right now, or are in the middle of a business meeting and need a little mental escape) take a little “virtual vacation” browsing through the many lovely Four Seasons hotels and resorts in far-off and exotic destinations.

In order to book a room or a spa treatment, once you’ve browsed your options and found one you want, you’ll still need to call the property in question – but the Four Seasons app makes it easy by providing a button on the screen that you just tap to place a call and book whatever you need right then.

It seems that booking directly through the app would be a pretty convenient feature, and it’s possible they’ll add that in the future, but for now the new Four Seasons app is a decent way to quickly find and book a room or a spa treatment at any of the Four Seasons hotels around the world – or just pretend you’re on a Four Seasons vacation.