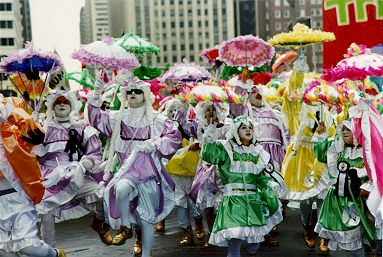 New Year’s Day is celebrated the world over, mostly on January 1 of each year. I think most anyplace is a good place to celebrate, and Philadelphia, Pennsylvania is no different. Philly offers visitors the annual Mummers Parade, which is a 107 year old tradition. In the Mummers Parade, paraders? dress up and get down on the main streets of the city. The parade kicks off at 9:00 a.m., which is an obscenely early hour on New Year’s Day. It finishes up sometime before 7:00 p.m. The Fancy Brigades’ two ticketed competitions at the Pennsylvania Convention Center take place at 12:00 noon and 5:00 p.m. Tickets to both Fancy Brigade Finales can be purchased for $10 to $15 at the Kimmel Center box office at 260 S. Broad Street, online at www.ticketphiladelphia.org or by calling (215) 893-1999. The revelry then moves to Two Street for a par-tay that goes well into the early morning hours.

The parade begins in South Philly in the a.m. and meanders up Broad Street to City Hall. The best viewing spot in town is at the judging stands outside City Hall, which is hardly a surprise. To get that primo location, you have to reserve tickets in advance. You can score those by going to the Independence Visitor Center at 6th &p Market Streets. They’ll set you back $14.50 each. For sidewalk seating, you can show up EARLY and set up shop near a drill location, where the String Bands and Fancy Brigades stop to perform. The locations are subject to change, but they are usually at Locust, Pine, Washington, Tasker, Mifflin/McKean, Wolf/Ritner and Shunk. But the only place you can see them all of them is at Broad Street and Washington Avenue.)

It is suggested that parade goers leave their cars at home and take public transportation to the festivities. That would, however, probably mean you’d have to take the Philly subway, which is scary as hell in my opinion. If you do drive, find a garage and park it.

Each of the different Mummer divisions performs a separate role. The “Comics” are in the business of satirizing issues, institutions and people; while the “Fancies” show off their glamorous get ups. The “String Bands” are just that…bands; and the “Fancy Brigades” are the street equivalent of a Broadway show. After reaching City Hall, the Comics, Fancies and String Bands depart for 2nd Street to party with the crowds. The hard workers at the Fancy Brigades aren’t finished yet. They will then put on two elaborate performances at the Pennsylvania Convention Center.

What exactly is a “Mummer?” Good question, though I’m not fully prepared to answer it. A Mummer is a person who belongs to one of the forty-four social clubs that participate in the organization. The clubs are split in to four distinct divisions, including Comics, Fancies, String Bands and Fancy Brigades. Almost as many types of guest towels Monica from Friends had. The sole purpose of these groups is to stage their varied performances on New Year’s Day. However, Mummers do perform at other events throughout the year. I’m sorry, it’s just a funny word – Mummers.

According to the press release:

Mummery traces its roots to ancient Roman laborers who ushered in the festival of Saturnalia by marching in masks while exchanging gifts and satirizing the issues of the day. In the 1600s, Swedish settlers to Philadelphia’s outskirts honored Christmas by beseeching their neighbors for dessert and liquor by dressing up, chanting and shooting firearms. The party eventually migrated to New Year’s Day and evolved into a series of neighborhood parades; then, as immigrants moved to the area from Ireland and Italy, each group added their own cultural flair to the local customs. In 1901, the tradition began in earnest with the first recognized and judged Mummers Parade. The term “Mummer” is German and means “to costume or masquerade.”

Very cool. We beg for dessert and booze in my hometown at this time of year too, but we do it by dressing as Elves and singing loud, obnoxious Christmas Carols.

The event has its very own website at mummers.com.